“Heroine of Deception III: Dark Delusion. A tragic girl, who was kidnapped after her family was murdered on her 17th birthday. She gains the power to use Traps, but in exchange, she is cursed, and is forced to kill humans in order to live.”
—Description on The Nightmare Princess website

Reina (レイナ?) is the protagonist of Deception III: Dark Delusion. After being kidnapped and witnessing her family's murder, she is reluctantly dragged into an ongoing struggle between the rebels and the kingdom of Alendar, equipped with the mysterious power to use traps.

Reina is a girl from Burganfada that is kidnapped by Miguel alongside Rosetta and Paul on her birthday. The three are taken to Alendar, where Miguel gives Reina to King Frederick and has her family murdered after being questioned. The king sends her to Hades Jail, but before any harm can be done to her, a boy named Marco gives her the ability to use traps, allowing her to escape.

“A girl who was kidnapped and taken to Alendar after her family was murdered. She learned the secret art of trapping and fought with Albert to rescue the other kidnap victims, but she experienced many tragedies after getting caught up in a conspiracy involving a Legendary Stone. While using the Legendary Stone to travel through time and space in an attempt to change her fate, she awakens in Dark Side Heaven.”

At some point while travelling in time to the past, Reina somehow woke up in Dark Side Heaven, lost until found by Velguirie. Merely wishing to be left alone, she sadly saw that she had to fight yet again, for the Nightmare Princess was after her soul. Realizing the latter used Traps as well, Reina lamented over a Trap user being doomed to a cursed life and untimely death. Learning that she was in the Quest Tree, a dream world and a place where such a fate was nonexistent, she forlornly amused the thought of a "quiet place, with no fighting".

She can also summon traps. 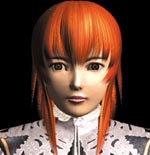 Reina has short- to medium-length red hair, brown eyes (golden in The Nightmare Princess) and fair skin. As a child, Reina wore a red and yellow frilly dress over a while blouse, with a black bow adorning the collar.

As a young adult, she wears a ribbon around her head, with a bow tied behind her neck; a white, long-sleeved blouse tied at the end, exposing her midriff, buttoned up to the middle of the neck, and a lace collar the length of her shoulders; a blue jacket that covers the upper back and both arms, lined with a darker blue and gold color; brown pants that reach just past the knees, covered by lighter brown chaps and a saturated brown belt; brown shoes over white stockings.

Retrieved from "https://deceptionseries.fandom.com/wiki/Reina?oldid=16693"
Community content is available under CC-BY-SA unless otherwise noted.